“This one step - choosing a goal and sticking to it - changes everything.”
Scott Reed
Things I'm doing differently this time :
Less run days, less strength and core workouts, less cross-training. I have a feeling I was overdoing it when I first started marathon training. Which, as most of you know, led to half-marathons due to injury for the first two attempts.
I also changed my training program to one that is slightly less intensive, but modified it to include a few longer runs.
I've also started using a 5/1 ratio, instead of a 10/1 ratio. This has not affected my pace and has really helped.
Also, last but not least is the fact that I've now been running for over two years and, following injury, I worked with a PT, which has led to a better running form and comfort with the 180 steps/min cadence. 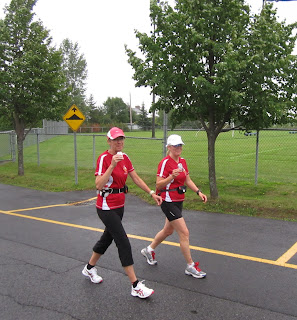 My Super SIL and I taking a gel during a walk break. We didn't plan to dress alike, great minds you know :) 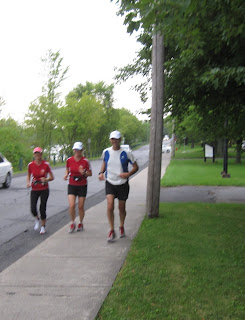 I love it when my brother and SSIL come along...Uber H was along too, he was taking the picture.
It's hard to believe that next weekend is my last very long run. After that, there are two more weeks of moderate training and one week of taper before the big day. I'm already starting to wonder if I've done enough. Many people I know who are training for the same race as I am, also for their first time, have used a much more intensive training program and done many more very long runs. It worries me a little bit, but at the same time, I remind myself that this is what has worked for me and allowed me to get to this point. I don't want to be under-prepared...I'd just like to finish with a smile and well, not too much over 5 hours (if I'm completely honest). I've read these same worries on other blogs from soon-to-be first time marathoners...I gather this is normal. Having said all that, I feel great and strong and confident...hopefully, after next week's long run I'll feel the same :)
Have a wonderful week everybody!
Cheers!
Posted by Anne at 6:24 PM

Sounds like you're doing great! Regardless of your worries, you will finish your first marathon!

My friend Kim and I ran together today and when I showed up at her house she came out wearing the same top I was. Completely unintentional!

Your training has gone so well, just trust your training and listen to your body. And have fun!

It's so good to hear you've got so close to the end without problems. You're a smart runner who's learnt what works for her body.

It's so hard not to compare ourselves to others sometimes but there's much to be said for doing what works for YOU! Your training is going beautifully. You will have enough--more than enough! Cheers!

Great plan. I think you are going to do great. I always think that too because my training is always way below others, but then comes race day and all the pieces come together! Trust yourself and your training....

Don't worry what everyone else is doing - you are clearly doing what works for you because you are going strong!

I think you'll do well - better to have listened to your body and be fresh at the finish line rather than overtrained and injured. I think once we get into our 40s we have to really listen and figure out where our personal limits are. Sounds like you've done just that! enjoy your taper!

I would love to have someone to run with ... too bad QC is such a big province and we happen to live over 10 hours from one another ;)

Sounds to me like you have found your stride and I have no doubt that you will do great in your upcoming marathon.

Make it a great day!

So glad things are going well for you! Love reading your posts.

Sounds like you incorporated some great changes and I'm a firm believe that doing the same thing will produce the same results. I think this is going to be a great race for you...very excited for you girl!!

it's totally normal to feel that way...you're ready, you're smart, you're going to be great!

You sound a lot like I did in the run-up to my marathon, except that you're going into it without a month layoff from being hurt. I think your training has gone great, you're running strong, you're healthy, and you're going to rock this. Just go out at an easy pace, don't try to push too hard bc you're feeling good. Do what you've trained to do, and you'll rock this. :) So excited for you!!

And my race report from Sunday is percolating in my brain as I type...my poor body is one big bruise. :)

This is so great Anne! I think you are doing everything right. Well done!

I remember wondering if I had trained enough before my one and only marathon. I think that is normal - after all, you never run the distance until race day.
I am so happy that your training is going well this time around. It was meant to be - cutting back a little gives your body time to recover and breaking up the run with a walking break really works well.
Keep up the good workouts and too funny you and SIL had the same shirt on for the day.

So glad to hear you're doing well!

I feel like I need to run less. How many days a week do you run? And what is the 10/1 or 5/1 thing? I'm sure you have said but I forget. No hurry just tell me when you have time. Thanks for your comment. Must be Irene had died more by the time she got to you.

Really seems like your training is going well :) I also always feel underprepared for marathons. I think I'd feel the same if I ran 70 miles per week. Sheesh.

You can reach your goal Anne :) You really did a great training! Have a great long run next weekend!

Another beautiful header!!!
You are doing well and I am sure you will finish a good marathon.

So glad to read you're doing well! I'm sure greatness will continue!

Hi Anne,
You look amazing!! I had to stop by and see what you are up to:) Take care of yourself! 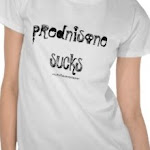